Tebowing: Is It Sending the Right Message? 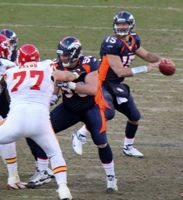 Tim Tebow’s amazing success on the football field has brought tremendous attention to his faith. His public posture of prayer has become a controversial phenomenon.

I’m sure most followers of American football know what Tebowing is and are familiar with Denver Broncos’ quarterback Tim Tebow going down on one knee and offering thanks to God for his most recent touchdown or win.

This week even the mayor of Pittsburgh, Luke Ravenstahl, wore a Tebow jersey and Tebowed after the Steelers lost to Tim Tebow’s Denver Broncos.

“This is not something I ever thought I’d have to do, and it’s certainly not something I’m looking forward to,” he said, according to the New York Daily News.

While driving Thursday, I heard an hour-long call-in program on this topic. Most callers were quite respectful. However, others were not.

Both reactions have come Tim Tebow’s way. Many in America think this is a gimmick and that it’s pure coincidence that his yards per completion (31.6) in the Jan. 8 wild card game set an NFL record. Others, however, note the match with the chapter and verse (3:16) of the famous scripture from the Gospel of John that Tebow has sometimes written on his eye black.

The host of the call-in program said that if Denver loses the next game, an appropriate new scripture might be Psalm 22:1 (“My God, My God, why have You forsaken Me?”).

Despite the put-downs and disrespect, many are showing admiration. The Tebow effect is spreading among young people in the schools across America. It is a growing phenomenon.

This Tebowing phenomenon is part of a larger landscape of religion in America. In many ways religion has been on the defensive. Over recent decades the desire to see the complete separation of church and state has been growing in America, especially in regards to the field of public education. This has led to rulings to prevent prayers before a game or class, though many contend these regulations go beyond the intention of the founding fathers and the Constitution.

But in professional sports, religious statements are not unheard of. In the game of soccer, it is not the least bit surprising to see a player run onto the field and reach down and touch the ground and then raise his hand to make the familiar sign of the cross. Some do this twice. I’ve even seen supporters holding up toward the heavens a picture of their particular saint or the Virgin Mary, hoping that help from heaven would enable their team to win.

These superstars have a platform for making a statement. But what should the average person learn from this?

What’s right for a Christian?

Leaving Tim Tebow and other religious sports stars aside for a moment, what should an average Christian do? How should we pray?

We should seek to do what God says pleases Him. Let’s look at some scriptures for guidance.

Isaiah the prophet tells us, “But on this one will I look: On him who is poor and of a contrite spirit [attitude], and who trembles at My word” (Isaiah 66:2).

In Matthew 6:5-6, Jesus Christ encourages us to pray to God in private and not to make a spectacle of our worship of Him to hypocritically draw attention to ourselves.

In verse 9 He states, “In this manner, therefore, pray,” which He followed with an outline for our prayers (verses 9-13). The opening four requests are:

“Our Father in heaven, hallowed be Your name. Your kingdom come. Your will be done on earth as it is in heaven.”

Jesus taught personal and private prayer that encourages us to put God first in all ways. He tells us to pray for His will to be done on the earth. Right now it seems that most things done on earth are driven by wrong motives and humanity’s natural desire toward selfishness, which leads to sin and the get way of life—“me first!” But Christ taught that we pray because we want to put God first.

Back to Tim Tebow

No matter what our personal reaction might be, it seems Tim Tebow is a man of sincere conviction. He says he desires to draw attention to his Christian faith and to thank God (though some copycats may have different motives). And, in spite of the headlines, it seems Tebow isn’t depending on miracles for success.

He says he’s been motivated by a quote from Tim Notke. Tebow said, “I’ve lived all my life by this quote since I was 6 years old: ‘Hard work beats talent when talent doesn’t work.’”

So, the man behind the phenomenon may not agree with all the assumptions, hype and headlines. Still, what message are people receiving?

To some, Tebowing sends the message that religion can be just an impressive publicity stunt with catchy slogans and awkward public displays.

To others, Tebowing sends the message that fame can be a powerful weapon in the culture wars.

Those messages might make the headlines, but real Christianity is much more.

The real Christian lives his or her life as Christ did every day.

As Jesus said in Matthew 7:24-27, we should hear Christ’s words (read the Scriptures) and build our lives on their teaching—like a house built on the rock. When trials and disappointment come, we will not be blown away.

It seems some believe that God will provide miracles for one team or the other depending on their prayers. But as one pastor who called in on the radio program said, if God answered the prayers of Christian sportsmen this way, then in the first century the score would have been 495 Christians alive and all the lions dead.

This weekend, may the best team win.

Paul Suckling, a native of England, is now a pastor in New England for the Church of God, a Worldwide Association. In the run-up to the Denver/New England game, he says he respects Tim Tebow, but has to support his home team. “May the best team win!”