Invisible Children, Criminals in Hiding: What Can We Really Do? 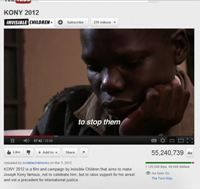 Millions have seen a viral video Kony 2012 seeking to bring evil Joseph Kony to justice. He and his victims are no longer invisible. But there’s a swirl of controversy about what we can really do to help.

Lord’s Resistance Army head Joseph Kony “is wanted by the International Criminal Court for crimes against humanity and war crimes including murder, sexual slavery and using children as combatants—sometimes forcing them to kill their own parents—in Uganda and its environs for more than 20 years” (Wall Street Journal).

For much of that time Kony and his victims were invisible to the average Westerner. His atrocities—and many other sickening evils in places like Rwanda, Sudan, Cambodia and elsewhere—would briefly make the news, but remain largely unknown by the general public.

So the amazing publicity caused by Invisible Children’s 30-minute video Kony 2012 is laudable. In just three days it had its first 40 million views. When both Bill Gates and Sean “P Diddy” Combs praise the effort to expose Kony on Twitter, it must be making some kind of impact. Perhaps the video will even help galvanize the world’s resolve to bring this criminal to justice.

But will it really help?

The success of the awareness campaign has bred critics and legitimate questions. Some ask, why now? Kony was indicted in 2005 and left Uganda in 2006. After Invisible Children’s effort to lobby Washington, President Barack Obama announced last October that he was sending some “100 military advisors to help Uganda and neighboring countries hunt down Kony, as part of a wider response” (AFP).

Others ask, how is the flood of donations going to be used? Last year, of the $9 million in income, Invisible Children says “37 percent went directly into social programs in central Africa.” AFP also reported that “watchdog Charity Navigator gave it a low two-star rating for lack of financial accountability.”

As with all disaster aid and humanitarian causes, it is prudent to consider how the funds will be used.

I totally agree that it is better to light a candle than curse the darkness. But emotional reactions are seldom the wisest course. Far better to make well-reasoned, long-term decisions and commitments to help in the most effective way.

What can we really do?

This world is full of hurt and pain, evil and injustice. A long look at it all can be devastating and disheartening. Aid workers and donors can experience disillusionment and compassion fatigue. Despite the best efforts man puts forth, for every Hitler defeated, a Pol Pot or Gaddafi or Kony arises. As Jesus described regarding poverty in the human condition, “You have the poor with you always” (Matthew 26:11), so, too, will evil and evil men continue to plague and burden humanity. But that doesn’t mean we should—as most of the millions who viewed this video will—just put it all out of our minds.

There is a real, effective and totally just answer to all of the world’s troubles. There is Someone with the power, wisdom and loving zeal to tackle it all and bring a positive, lasting solution. With the second coming of Jesus Christ and the establishment of His Kingdom, humanity will finally experience the deliverance from evil, abuse and tyranny.

God has allowed man to choose his own way since the Garden of Eden—and we all see how humanity’s choices are working out. But our loving Creator has promised to step in and end the evil and suffering. No criminal or victim is invisible to Him.

He is recruiting volunteers now to help in His efforts. He is looking for people who are truly moved by the tragedies and evils—who “sigh and cry over all the abominations” being done today (Ezekiel 9:4).

What practical steps does He want His volunteers to do now?

These are not just quick and worthless steps to make us feel better. They are actually a vital part of the solution. Jesus Christ said it is for the sake of His chosen followers that He will come and rescue humanity (Matthew 24:22)!

His followers have the future of the world resting on their shoulders and must take this mission very seriously. We are called on to be “looking for and hastening the coming of the day of God” (2 Peter 3:12). We are to love His appearing (2 Timothy 4:8).

It’s our only hope. It is the only real hope for the invisible children. Thankfully, it is a sure hope.

Learn more about this hope in our booklet The Mystery of the Kingdom.

Mike Bennett coordinates the blogs for cogwa.org. He and his wife, Becky, and two daughters attend the Cincinnati/Dayton, Ohio, congregation of the Church of God, a Worldwide Association.

For more about the hope of the Kingdom of God, see:

The Mission of the Church of God, a Worldwide Association