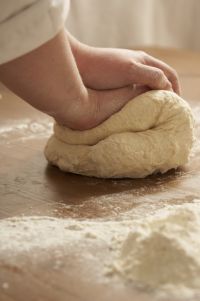 Watching the leavening process for bread is fascinating and amazing when one takes the time to notice a loaf in progress. First the baker takes a scant tablespoon containing scores of little beads of dry yeast, weighing not even an ounce, and puts it in some warm water with honey or sugar added. Within seconds the water begins to seethe with activity, and a tawny brown foam forms.

This mixture is added to six or more cups of flour along with additional liquid and oil; vigorous kneading insures a uniform blending of the ingredients. Finally the dough is rounded, placed in a bowl, covered and left in a warm place to do its magic.

Usually in less than an hour the mixture has doubled in size. All of the air is then punched down, the dough is kneaded once again, and either it’s divided into three loaves, or given a chance to rise a second time. Either way, the end result is that less than a tablespoon of yeast granules starts a chemical reaction that gives rise to three loaves of bread.

I have no idea what the ratio of 5/16 ounce of yeast to six cups of flour would be, but the power it exerts certainly gives me visible proof that indeed “a little leaven leavens the whole lump.”

A slave’s story: the discovery of leavening

The Israelites didn’t have the luxury of Fleischmann’s Yeast in a packet, but they did have a connection to leaven’s long history. They were in slavery to the nation that it seems first discovered leavening. That’s right. Leavening (or the process) was discovered in Egypt.

The story goes that a slave in a royal Egyptian household forgot about some dough he had set aside. When he returned, it had doubled in size. Trying to hide the mistake, he furiously punched down the dough and baked it, resulting in a new, lighter variety of bread.

What began as an accident changed the form and texture of bread forever. Eventually bakers routinely saved a bit of starter from each batch of dough before the loaves were baked, and used it to leaven the next day’s bread. It is possible that a single starter might have had years’ worth of history attached to it, resulting in hundreds of additional loaves over time. When Israel left their starters behind, they were leaving Egypt and its “culture” in more ways than one.

For centuries bakers relied on this leavening process. Why it worked doesn’t seem to have been a question. When, in the 1700s, scientist Anton Van Leeuwenhoek inadvertently discovered yeast cells with his newly improved microscope, their existence did not warrant his further investigation. It took another hundred years before Louis Pasteur discovered how yeast actually worked. Not too many years later, the Fleischmann’s Yeast Company was born.

The effects of leaven

The effect of yeast in a mixture is marked by silent but vigorous activity. Its spores have the potential to multiply exponentially, infiltrating every part of a given mixture. One sure way to stop its progress is through baking.

There is a kind of leavening that can be at work in the lives of Christians. It, too, is often silent as it works in the heart and mind, but it will manifest itself, not as loaves, but as fruits of its spirit.

Paul describes some of them in Galatians 5:19-21. He further warns of its insidiousness: “Your glorying is not good. Do you not know that a little leaven leavens the whole lump? Therefore purge out the old leaven, that you may be a new lump, since you truly are unleavened. For indeed Christ, our Passover, was sacrificed for us. Therefore let us keep the feast, not with old leaven, nor with the leaven of malice and wickedness, but with the unleavened bread of sincerity and truth” (1 Corinthians 5:6-8).

Soon members of the Church of God will be observing the Passover and the Days of Unleavened Bread. They will be examining themselves through the lens of the Bible, detecting and identifying the spiritual leaven of sin where it exists, purging themselves of it, and halting its ability to thrive and spread.

For additional insights about the effects of leaven in the life of a Christian, listen to the following sermon on our Media page: “A Little Leaven” by James Capo. Scroll down to this sermon given March12.

Karen Meeker lives in Missouri. She and her husband, George, of 50 years have a wonderful family, including five delightful grandchildren. She enjoys reading, writing and serving in her local church congregation.

Lessons From Leavening and a 3-Year-Old