Answering Superman’s Questions: The Destiny of the Men of Tomorrow 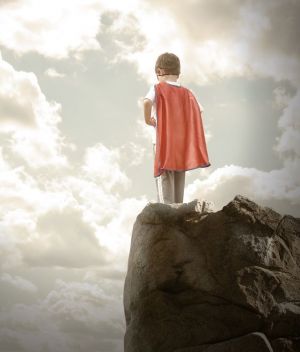 Faster than a speeding bullet. More powerful than a locomotive. Able to leap tall buildings in a single bound … it’s SUPERMAN! He has some questions—for you!

Heroes have always fascinated me—especially superheroes. So when Man of Steel, the latest Superman movie, came out in theaters, I went out and saw it. The power he is portrayed as having is amazing—the strength, the speed, the flight, the laser eyes.

As the movie progressed, I noticed there were two major questions that the Superman character had to answer. After some thought, I believe these questions apply to us as well.

In the movie, Superman’s father said, “I can’t help but believe that you were put on this earth for a purpose. And no matter how long it takes, you owe it to yourself to find out what that purpose is.”

What is our purpose? Instead of traveling around the world to find our purpose as Superman did, all we have to do is turn to our Bibles.

God has given us a great and magnificent purpose. He destines us to be kings and priests who will rule alongside Him in His perfect Kingdom (Revelation 1:6; 5:10; 20:4).

Near the end of the movie, General Zod (the primary villain in the film) stated, “Now I have no purpose!” That would be a fate that is hard to imagine. Thankfully, it’s also one that we will never have to worry about if we remain faithful to our calling (Hebrews 3:5-6).

We will always have a purpose! Not even death will be able to separate us from our purpose, because we will be raised from the grave to immortality (1 Corinthians 15:51-53). We will reign forever with God the Father and His Son Jesus Christ. As spirit beings, we will undoubtedly have greater powers and abilities than humans have or can imagine!

Is the world ready?

The second question the movie asked was, “Is the world ready?” As Superman said, “My father believed that if the world found out who I really was, it would reject me. He was convinced that the world wasn’t ready. What do you think?”

What do you think? The answer is more relevant to us than we might initially realize—because as members of God’s Church we have something alien to this world dwelling within us: the Holy Spirit (2 Timothy 1:14)!

The world might not be ready for us now, but there is coming a time when it will be—after Jesus Christ returns to earth, defeats the armies that will fight against Him when He returns, and sets up the Kingdom of God!

A Hero with answers

Despite all of Superman’s power, these two questions plagued him for most of the movie. There is another Hero, however, who knows the answers to these questions—and not just for Himself, but for everyone who has ever lived. This Hero is Jesus Christ.

Digital effects in movies can impress us with the powers of the fictional Superman. His speed and ability to fly into space and orbit the earth is visually impressive. But we should remember that Jesus Christ actually sustains the universe through His power (Hebrews 1:3; Colossians 1:17).

In fact, He’s much more powerful than anything in the universe—because He created the universe (Colossians 1:16). And He has all authority in heaven and on earth (Matthew 28:18). Read Job 38-41 for an incredible description of God’s supreme power and ability.

Jesus Christ is returning to save the entire world from destroying itself (Matthew 24:22). He gives us purpose and will make the world ready for us. Superman might be a powerful fictional hero, but we have a much more Superhero: Jesus Christ!

Joshua Travers is a member of the Athens, Ohio, congregation of the Church of God, a Worldwide Association, and a Superman fan.