This year has certainly gotten off to an exciting start! As I write to you, I am in Monterrey, Mexico, conducting leadership development classes. This is the first of 10 weekends that we have planned for this calendar year, as the next phase of the International Leadership Program (ILP) begins. We have titled this series “Focused Mentoring.” The idea is to take a smaller group of individuals and provide more intense training followed by personal mentoring. The first phase of this program involved more than 400 men and women from around the world. This second phase will be much smaller.

We have 26 attending here in Monterrey from various congregations in Mexico. They all attended the first phase of the program and were selected by their pastors for additional training. Once we complete these classes, each attendee will be assigned a personal mentor and a regional mentor. We are hopeful 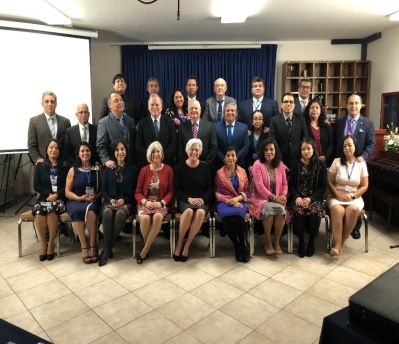 The International Leadership Program was begun two years ago in February of 2018. In the calendar years of 2018 and 2019 we traveled to 10 regions and conducted classes on a wide range of topics about leadership. We had classes on doctrine, personal development and Church organization. Leon Walker discussed the differences between one’s opinion and true doctrine. Britt Taylor discussed the importance of a godly marriage for a leader in the Church; Doug Horchak discussed the organization of local congregations; Clyde Kilough discussed principles for preparing messages for Sabbath services; and I gave a presentation titled “Truth, Teachings and Traditions: How to Tell the Difference.” And there were other topics covered making for a full two days!

The response to our first round was outstanding. In addition to presenting high-quality material, we also established a connection between the headquarters administration and elders and leaders in the Church from around the world. As a result of these meetings, we now have a personal connection with more than 400 people. And from this group, we have (with our pastors’ input) selected a smaller group for special focused education and training for the next year. And this is only the beginning. This program is modeled after the Focused Mentoring Program in the United States, which has a different group of couples training each year. Because of the logistics, we plan to have the focused mentoring aspect of the ILP every other year. Ideally, this will happen in the off years from the biennial International Ministerial Conference, which is held in years ending in odd numbers. The next ministerial conference will be in 2021.

This is all very exciting, and we certainly request your prayers for the success of this second phase, which is the most ambitious program for leadership development in our short history.

Another exciting bit of news presented last month was the listing of our 2020 Feast sites. This is normally presented on In Accord sometime during the month of December or January. This year the program announcing the 2020 Festival sites was posted on Jan. 9. The normal viewership of In Accord is between 800 and 1,000 connections (equating to 1,600 to 2,000 people viewing), but this special edition had over 1,700 connections—double the normal average. If our formula for calculating viewership (doubling the number of connections) is accurate, we had over 3,400 people watch this edition. That equals more than 60 percent of our U.S. attendance. The new international sites in Greece and Jordan certainly sparked a lot of interest! We also have some wonderful new sites serving the U.S. with the return of Victoria, British Columbia (serving congregations in the northwestern U.S.) and Tucson, Arizona (serving congregations in the southwestern U.S.).

We are all excited about the upcoming Feast and our efforts for leadership development, but the world has no such joy. In fact, it has grown so much darker that the keepers of the “Doomsday Clock” have moved the minute hand to 100 seconds to midnight. This is the first time the clock has been expressed in seconds instead of minutes. With all the turmoil and potential turmoil, the world is once again entering a very dangerous and dark period. Christ described the end time as a time of “wars and rumors of wars” (Matthew 24:6). While there have been brutal wars in every century, the potential for a war that would destroy all life has never been greater than in our day.

In addition to the general violence and the threats of war in the world, we have the impeachment of a U.S. president for only the third time in American history. While Mr. Trump has been acquitted by the U.S. Senate, no one knows the damage this process has caused to the fiber of this nation. Trust in government has fallen to a new low. Then there is the coronavirus, a virus that has taken hundreds of lives and spread rapidly around the world, highlighting a huge concern about the interconnection of nations in the spread of disease. And after 47 years in the European Union, the United Kingdom finally separated from it on Jan. 31. The Church has taught for many years that something would happen to separate the U.K. from the European Union. That has now happened!

I am very excited about the new round of ILP classes, and I am very excited about this year’s Feast, but it can be discouraging to see what is happening in this nation and around the world. Yet it is ultimately encouraging, because Christ said all these things must happen before He returns! This makes me pray more fervently for His return (Mark 13:33) and to pray for the brethren who are experiencing severe trials around the world (James 5:16).

Sincerely, your brother in Christ,